Before we get to Jesus, here is what the Apostle John saw:

“And EVERY CREATED THING which is in heaven and on the earth and under the earth and on the sea, and all things in them, I heard saying, “To Him who sits on the throne, and to the Lamb, be blessing and honor and glory and dominion forever and ever.”–Rev. 5:13

“This is the prophesy and fulfillment of Philippians 2:10-11…Here the angelic conflict will be resolved. Satan will be forced, after all these centuries of blasphemy, slander and accusations against God, to praise God and to admit God and His Son are worthy to be praised.”–J. Hampton Keathley’s Commentary on Revelation

“Even the enemies of Christ, wicked men and devils, will be obliged to own Christ to be Lord, to the glory of God the Father”.–John Gill’s Commentary

This is what the Lord said through Isaiah: “I have sworn by Myself, The word has gone forth from My mouth in righteousness And will not turn back, That to Me EVERY KNEE will bow, EVERY TONGUE will swear allegiance”.— Isa. 45:23.

Pastor John MacArthur of the Grace To You broadcast says, “As Isaiah predicted, even the damned demons, including Satan, will have no choice but to agree with and confess in worship that Jesus Christ is Lord”.

The Book of Romans confirms what Isaiah said: “For it is written, As I live, saith the Lord, EVERY KNEE shall bow to me, and EVERY TONGUE shall confess to God.”—Rom 14:11

According to this verse, Satan himself will bow on his thorny, twisted knees and confess that Jesus Christ is Lord!–Dr. Adrian Rogers

The Book of Philippians confirms it again by saying, “So that at the name of Jesus EVERY KNEE WILL BOW, of those who are in heaven and on earth and under the earth, and that EVERY TONGUE will confess that Jesus Christ is Lord, to the glory of God the Father.”—Philippians 2:10-11

The very last verse in the Book of Psalms gives us this prophetic command, “Let EVERYTHING THAT HAS BREATH praise the Lord“–Psalm 150:6

“What a moment that’s going to be: the tongues of evildoers will only be able to acknowledge and worship the Lord!”–Evangelist and Author David Wilkerson

It is interesting to note that the Prophet Isaiah, the Psalmist, the Apostle John, and the Apostle Paul all knew that Jesus would be worshiped in the end by the eternally condemned Satan and the demons. Certainly Jesus knew this. What did Jesus have to say about it? One day Satan and Jesus had a “sword fight” in the Wilderness. (Matthew 4:1-11)

When Jesus was tempted by Satan in the Wilderness, we see that Jesus used the scriptures as a weapon. The scriptures say, “For the word of God is alive and active. Sharper than any double-edged sword”.

When Jesus quoted the scriptures to Satan, He wasn’t talking to Satan ABOUT the scriptures, as if they were an inanimate object. Instead, Jesus made the scriptures come alive into the present and USED them as a sword against Satan. There’s a big difference in talking about scripture, and using scripture. When Jesus said, “It is written”, He was drawing the sword out from its foundational sheath and original setting. Then when He actually SPOKE the scripture, it went from being a truth of centuries ago, into being an active living weapon of present truth and application!

For the first two temptations, Jesus uses the sword of truth defensively, while Satan goes on the offense.

Satan took the sword of temptation and lunged towards Jesus’ hungry stomach by telling Him to turn the stones to bread. Jesus used His sword to block him defensively by replying with a “shall not”. Jesus brought the truth from hundreds of years back to address His current needs and said, “It is written, MAN SHALL NOT LIVE ON BREAD ALONE, BUT ON EVERY WORD THAT PROCEEDS OUT OF THE MOUTH OF GOD.” He blocked the temptation.

Satan then swung low towards Jesus’ feet, hoping maybe to bruise His heels at this moment by tempting Him to prove who He was by jumping down from a high place and let everyone see the Angels protect His feet. Jesus again responds defensively with a “shall not”. Jesus said, “It is written, YOU SHALL NOT PUT THE LORD YOUR GOD TO THE TEST.” Satan was blocked again.

DO YOU REALIZE THAT THIS SCRIPTURE IN ITS ORIGINAL CONTEXT DOES NOT APPLY TO SATAN AT ALL? What just happened? THIS IS SO VERY IMPORTANT! Two things happened that frankly blow my mind.

1). John Gill, a renowned 18th Century Baptist Theologian who mastered Greek and Latin by the age of 11, wrote in his commentary that Jesus took the original Hebrew verse in Deuteronomy 6:16 and altered it from plural to singular in both Luke 4:12 and Matthew 4:7.

“In the text in Deuteronomy the words are, “ye shall not tempt the Lord your God.” The second person plural, is here changed into the second person singular, to accommodate the words to Satan; whom Christ singly addresses”.–Gill’s Exposition Of The Entire Bible.

It’s true. Hebrew and Greek Lexicons verify that Jesus, who has the authority, altered the verse from plural to singular.

2) This command found in Deuteronomy 6:16 was originally written strictly to the Israelites alone. Deuteronomy 6:3 clarifies this: “Hear therefore, O Israel, and observe to do it”. This law in its original context did not apply to any nation, people, or entity outside of Israel, much less to Satan. As verified by Gill and others, Jesus was NOT applying this passage to Himself either; it was now being used in second person singular. If Jesus was just quoting scripture in context, the Devil would have said, “So what??? This is a command for Israel, it has no hold over me”. BUT Jesus, who was led by the Spirit, had the authority to take scripture out of its original context and apply it directly to the person in front of Him. THAT IS A FACT, and it changes the rest of the story dramatically. Do you understand? Do you see what is happening? Jesus changed the noun from plural to singular and he changed the application from Israel only to Satan. REMEMBER THIS, BECAUSE JESUS IS GOING TO CHANGE THE APPLICATION ON ANOTHER VERSE.

I also ask you to notice that Jesus is going to switch tactics. The first two temptations were met with “shall not” commands, which are defensive in nature. But the third offer from Satan was met with a “You shall” command which is offensive in nature. Let’s look at sword-fighting to understand what Jesus did.

You meet him where he is now. But when you go on offense and successfully strike, you have to move past his current defense. You move ahead, forward, and you go beyond his current action. To strike successfully you cannot move in your opponent’s time, you have to “move ahead” of him. You don’t meet him “where he is at”, you go ahead of him. In a manner of speaking, you move forward “into his future”. 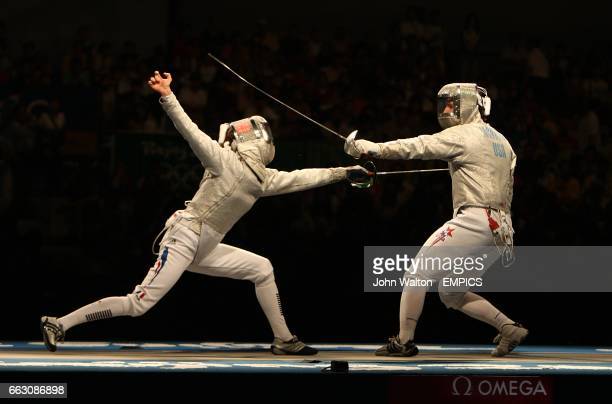 After the second temptation, Satan saw that his tactics were not working, so he held his sword out and offered an exchange of giving Christ the world if Christ would worship him.

For centuries we have been taught that Jesus did not go on the offensive during the third offer from Satan, but continued to react defensively. Some theologians have taught us that Jesus almost succumbed to bowing, but that He caught Himself at the last second and spoke the scripture to gird Himself from bowing. Others teach that Jesus was defensive and was simply instructing Satan the reason why He wasn’t going to bow. I believe the scripture shows all of this to be wrong.

I believe Jesus was mad and incensed by Satan’s third offer! He wasn’t going to be bullied. You can see the change in Jesus because He didn’t start with “It is written”. He went on the offensive and began telling Satan to get lost! You can clearly see that Jesus stopped using defensive “shall nots”. If Jesus wanted to remain defensive, He could have easily said, “It is written, thou shalt not have any Gods before me”, and they could have kept on dueling. Instead, Jesus saw an opening for a painful blow that would hurt and make Satan leave. So, Jesus switched tactics and used a “You shall” which is a forward offensive move.

Then Jesus said to him, “Go, Satan! For it is written, ‘YOU SHALL WORSHIP THE LORD YOUR GOD, AND SERVE HIM ONLY.” (προσκυνήσεις is Greek for “You shall worship”. The NAS version of the Bible is the most accurate here)

So let’s get something clear right now. When Jesus said, “You shall”, Jesus wasn’t girding and instructing Himself. And Jesus wasn’t just being defensive and saying no to the Devil either. Jesus wasn’t swinging his sword into the air and speaking to all mankind. He didn’t say “they” or “we”. When Jesus said, “YOU”, he wasn’t re-addressing the Israelites as it was originally used. Instead, He said προσκυνήσεις which is Greek for “You shall worship” (second person singular in Greek), and he was looking at one person. He went on offense and swiftly moved forward, past the current action. Once again, Jesus quoted a command that in its original context had no meaning or application for Satan, but when Jesus spoke, it got pinned on Satan.

So what just happened was that Jesus held the tip of the sword of truth to the throat of Satan and spoke forward-in-time applying the word directly to the Devil saying, “YOU…shall worship the Lord YOUR God, and serve Him only”.

He prophesied that it was the Devil’s destiny to be thoroughly defeated and to once again bow low and worship before God. This prophecy is unfolded in Revelation 5:13 where we see Satan (a created being) and all those “under the earth” offering blessing and glory and honor to the Lord.

And every created thing which is in heaven and on the earth and under the earth and on the sea, and all things in them, I heard saying, “To Him who sits on the throne, and to the Lamb, be blessing and honor and glory and dominion forever and ever.”–Rev. 5:13

Remember what I wrote earlier? It needs to be repeated, Jesus wasn’t simply quoting another ancient scripture. In its original context, this was another passage that was ONLY addressed to the Israelites and had no meaning or bearing for Satan. Jesus was the only Israelite there, and He wasn’t getting mad at Himself or talking to Himself. He was mad at the Devil, and He took the verse and applied it directly to him! If Jesus did not speak it prophetically, but just used it in its original context of applying to Israel, it would have no affect upon Satan. It was a prophetic threat of truth that put great fear in Satan’s heart! Satan will be sent to the Lake of Fire, but not before He is defeated both outside and…inside. Before this, Satan was more than happy to sit around and talk Jesus to death. Now he left!

(By the way, this would be a great drama skit. Just don’t forget to tell where you first heard it)

WHY will the condemned praise God? Are they getting released? No, they will never come out. But if Isaiah, the Psalmist, Paul, John, and Jesus felt the need to tell us about it, surely there are some good reasons for it. We will explore that in the next post

Comments or questions can be sent to defrostingcomments@gmail.com