Mike Breen’s Warning: Why The Missional Movement Will Fail

Posted on October 20, 2011 by defrostingwindows

It’s time we start being brutally honest about the missional movement that has emerged in the last 10-15 years: Chances are better than not it’s going to fail.

That may seem cynical, but I’m being realistic. There is a reason so many movements in the Western church have failed in the past century: They are a car without an engine. A missional church or a missional community or a missional small group is the new car that everyone is talking about right now, but no matter how beautiful or shiny the vehicle, without an engine, it won’t go anywhere.

So what is the engine of the church? Discipleship. I’ve said it many times: If you make disciples, you will always get the church. But if you try to build the church, you will rarely get disciples. 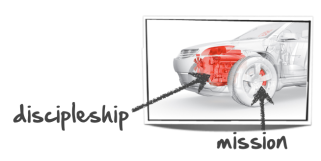 If you’re good at making disciples, you’ll get more leaders than you’ll know what to do with. If you make disciples like Jesus made them, you’ll see people come to faith who didn’t know Him. If you disciple people well, you will always get the missional thing. Always.

We took 30 days and examined the Twitter conversations happening. We discovered there are between 100-150 times as many people talking about mission as there are discipleship (to be clear, that’s a 100:1). We are a group of people addicted to and obsessed with the work of the Kingdom, with little to no idea how to be with the King. As Skye Jethani wrote in his Out of Ur post a little while back “Has Mission become an Idol?”:  (It is certainly out of line when placed before the Greatest Commandments which entails every measure of discipleship).

(These statistics are similar to what was posted in Great Commission vs. Greatest Commandments )

This is just an intro; to see the real meat of Mike’s warning, go to Why The Missional Movement Will Fail

Husband, Father, Salesman, Veteran, Real Identity: Child of God
View all posts by defrostingwindows →
This entry was posted in Theology. Bookmark the permalink.

3 Responses to Mike Breen’s Warning: Why The Missional Movement Will Fail